About two weeks ago we played the next scenario from the SkirmishCampaigns “Großdeutschland at Kursk” book. Again for those of you who are interested in how thing went so far… here are the first 4 games and the grand total results. Game number 5 can be found on this blog. As before I am going to tell the story from my (the German) point of view.

The game is set on July 7th 1943 around mid-day. In it units from the Soviet 112th Tank Brigade are counterattacking the leading elements of the Panzergenadierdivision Großdeutschland, trying to push through.

Being the German player I had 4 PzKw IV´s with veteran crews, a mechanized infantry squad (officer, NCO, two MG-42 teams and four riflemen) mounted on a SdKfz. 251 as well as a 7,cm Infantry gun with crew and a truck. Two PzKw III´s would re-enforce me at the beginning of round four.

The Soviets had a total of 7 T-34/76´s, two SU-76´s, a mechanized rifle squad (NCO, one DP LMG team and 6 riflemen with a mix of rifles and SMG´s) mounted on a truck, plus a Rifle platoon HQ (officer and one riflemen).

The table was fairly flat, with two large hills on each half of the table. It was cut in half by a small river or creek, which was crossed by a stone bridge. There was a road leading from the Russian side of the table to the German side with a another road leading from the right table edge to a crossroads just off the bridge on the Soviet side. There were a number of medium-sized woods on the table. The river itself had a soft ground (meaning vehicles had to make bog checks to cross it) and it was impassable inside the woods.

The game was set for a maximum of 12 rounds. To win the Soviets had to move two AFV´s off my side of the table on the road. For me to win, I had to prevent this.

The right hand PzKw IVs in their starting position

Now the biggest problem from my point of view was, that the Soviets had a total of 9 vehicles (7 T-34’s and 2 SU-76’s) that counted for achieving their victory conditions. In other words they only had to get about 1/5th of their tanks off the board to win this one. And they were fast enough to do that by turn three if nothing held them up. While my tanks (at least the ones that were on the table when the game began) had the ability to know the T-34’s out, they were also just as vulnerable to their fire and every tank lost would reduce my chances to knock out enough T-34´s to win. So I had to find a way to make the most of the resources I had at hand. I decided on a fixed defense. I did not even deploy the SdKfz. 251 or truck. They would be useless for what I planned and would only draw fire. My infantry was deployed inside the woods on a hill right opposite the bridge, in hope that they might cause some trouble for the Soviet infantry or SP-guns. Since the Infantry gun did not have the ammo to take out a T-34 except from the sides or rear, I deployed it on the lee side of my left hill, in hopes that they would be able to get a shot or two off when the Soviets passed them. Two of my PzKw IV´s were deployed hull down behind my right hill, one hull down inside the woods behind my left hill. They all had good fields of fire on the bridge. Now there was no good position left for my forth PzKw IV, so it started ahead of the others. It was meant to charge ahead and secure itself a position inside one of the woods with a flanking position on the bridge.

The Soviet player split his forces between both entry points. The infantry would use the right flank entry point. In return the far table edge got one more T-34 then the other entry point. All his vehicles started at maximum speed.

The game began as expected. The Soviet tanks charged ahead, while I was waiting for mine to fire. By the time the first SU-76 was across the bridge, my advance PzKw IV had taken up its firing position inside the woods and stopped. While chances for a hit were slim (after all the Sp-gun was at full speed) I still risked to fire… and on the second shot it found it´s way home. Now the 7,5cm round wrecked havoc in the SU-76´s flank and left it a burning hull blocking off my side of the bridge. But that did not seal it off yet. Since a SU-76 is lighter, a T-34 would still have been able to push it forward, which was just what one of them attempted to do. While a T-34/76 slowed down to push it away one of my right hand PzKw IV took aim and hit it in the turret, setting off the large calibre ammo. The T-34 went up in a ball of flames and the bridge was sealed for good now.

Just at that time, the truck with the Russian infantry arrived besides the bridge, they dismounted and started firing at my infantry. The range was already close and it cost me both machine gunners and one assistant gunner. Not one to let these things rest, my officer ordered one of the riflemen to pick up one of the MG-42´s and return fire. And a hellish return fire it was. Between the machine-gun fire and the fire put up by the riflemen the Soviet infantry was killed to a man.

The rest of the round showed the big weaknesses of the earlier T-34´s. The commander had to do all the aiming and firing himself. As a result most of the T-34´s only got one shot off at best at my tanks and they all missed, also on account of the high speed they were travelling at. In return my tanks managed to take out another T-34, again hitting its ammo supply. 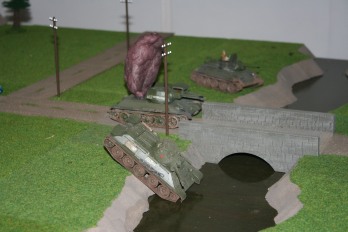 The second round began just as bloody as the first had ended. The first T-34´s began to cross the river. One (the one in the back of this shot) was taken out just before he went down the riverbank. The shot from one of the Right hand PzKw IV´s hit it in the engine compartment, setting the tank alight and burning all the crew inside. Not a pleasant end! The other one (the one sliding down the bank in this shot) made it across and came up in a spot where it was virtually out of sight for all my tanks, except for one that could see its very rear. This put it into a prime position to make a short sprint the next round and be off the table. So my infantry took it on. They fired their HMG at its tracks and close assaulted it with hand grenades. I had only hoped to do a little damage and slow it down, but when the dust settled, it had thrown a track and was immobile. 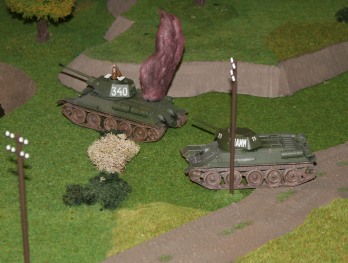 At the same time my advance PzKw IV inside the woods was in deep trouble. Two T-34´s had stopped just on the other side of the river and were taking aim at point-blank range. He managed to take one of them out before it could fire (again an ammo hit), but the second one (the one besides the telegraph pole) avenged it´s comrade. The shell hit my turret, destroying the main gun and killing everyone inside, except the driver. (It would later be taken out by the remaining SU-76 when trying to withdraw.) But there was not much time for the T-34 crew to celebrate. My left hand tank scored two hits on it and destroyed it for good. So in total things started to look better. The Soviets had only 3 T-34´s (one immobilized) and one SU-76 left to achieve their victory conditions. But it was not all bright either. The two remaining T-34´s had just crossed the river and would be able to move off the table by round 4 if nothing stopped them. Even worse… one of them hit my left hand PzKw IV setting off it large calibre ammo (we have never had near as many ammo hits in one game by the way). So that put me down to half my firepower. To finish things off for the second round the immobilized T-34 turned it´s turret and fired its co-ax LMG at my infantry, killing one of them.

At the beginning of round three one of my remaining tanks decided that he wanted to give the infantry some breathing space. Even though the crew could only make out the rear of the enemy tank, it was easy enough to hit, being the sitting duck it was. Two shots hit true and wrecked the T-34. Since both the T-34´s that had made it across the river were now out of their line of sight due to one of the woods, my PzKw IV´s began to manoeuvre to get a better shot at them once they neared the board edge. And charge ahead they both did. But they were not meant to make it all the way. The first was hit in the flank by my infantry gun. It hit the external fuel tanks, spilling flaming liquid over the tank and setting it alight. The second one would only make it to it´s side before in turn being taken out by one of my tanks (another ammo hit). Now the Soviet player had no chance to achieve his victory conditions, but tried a suicidal charge with his last AFV (the SU-76) anyway. It did not even make it to the river.

In the end none of the Soviet vehicles had survived and only three crew had made it out, only to be rounded up by the infantry. In turn I had lost four infantry, two tanks and seven crew. 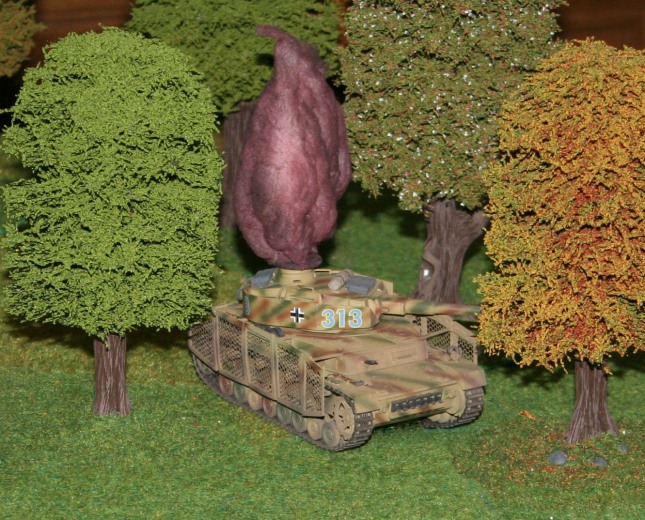