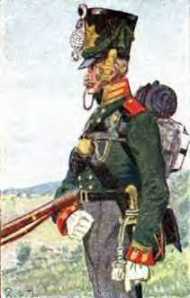 So this is the unit I had been working on for my Völkerschlacht / Möckern project over the past week. It is a mixed unit of East Prussian Jäger and Guard Jäger. Why mixed? Well they both served at Möckern, but the Gardejäger only with 70 men, which would make them far too small to be effective on the tabletop. So I decided to amalgamate them with their East Prussian brethren. Upon further research this proved to be quite a good idea from a historic point of view as well. For when I was looking for information on their uniforms (more on this later), this proved a mixed blessing. While one could find a couple of prints showing the Gardejäger, only one Knötel / Letzius print could be found on the Eastprussians. There is some really good information on the Calpe homepage, but beyond that information on them is rare. Oddly enough there is lots of information on them when it comes to World War One, but that is about it. Still I wanted more. The best info in the 1920´s book “Stammliste der Königlich Preußischen Armee seit dem 16ten Jahrhundert bis 1840”. The book states that both units were formed from Feldjäger taken Prisoner during the 1806 campaign and returned by the French. They formed a new Jäger unit which was divided in 1809 into the Gardejäger (1st Battalion) and the Ostpreußisches Jägerbattalion (2nd Battalion). Now when it comes to their combat history the book simply sais that the Eastprussians share the combat history of the Gardejäger. To me this indicates, that they were not simply attached to the same army Corps, but rather amalgamated on the battlefield as well. The Prussians had a tendency to create ad-hoc battle groups if need be (the battle for Möckern actually is a fine example of that) and I think chances are slim that they would share the same battlefield history in that “environment” unless they were interlinked so close, that they could not be separated to be attached to different battle groups. I that sense it seems to have been a wise decision to amalgamate them into one unit on the tabletop as well. 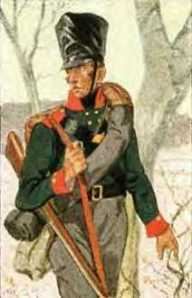 Now on to the uniforms. First thing, these men should not be confused with the Freiwilligen Jäger. Freiwillige Jäger were volunteers (as the name suggests) that were attached to infantry units. The units we are talking about here were dedicated Jäger units and had slightly different uniforms from the Freiwilligen Jäger. Their coats were dark green with red cuffs, collars and turnbacks. The Gardejäger also had brass coloured braid on their collars and cuffs. Their belts and such were black, the sword knots dark green (except for the officers). They had sword type bayonets, which were only attached to the rifles if needed. Please note that the print to the right is somewhat wrong in that they never wore their greatcoats or blankets wrapped around their bodies, but always attached to their backpacks to avoid entanglement.

Now I took one small liberty with these minis. Since this print to the right is the only one I could find showing a Eastprussian Jäger, there are none showing their turnbacks. It is likely that these were just edged red like they were with the Guards, but I still wanted a little variation on them, to set them apart from the Guard. So I painted their turnbacks completely in red.

Now the last issue with these was their basing. As you know I am using the Republic to Empire rules. With most units you can just detach a pair of skirmishers or two and that is it. As you might have seen, I usually just paint up two extra minis and base them separately on hex bases. (Hex bases are not required by the rules, I just liked it.) Now with units that had a proficiency in skirmishing like Légère, Rifles, Schützen or indeed Jäger, they can deploy the whole unit as skirmishers (minus a stand or two to represent their reserve). At first I had planned to just paint the extra minis and base them as usual, but then I got second thoughts. I would be fine with just a unit or two, but would I really want to do that for all those French Légère, this could easily turn into a pain in the backside, not to mention all the money sunk into it. So I went for something different. I approached Warbases and had them cut me some 2cm x 4cm bases with two rounded corners. That way they look like my normal bases when put one behind the other in normal formation and they can be used to deploy them as skirmisher pairs none the less. I know I could just have cut some Victrix bases in half, but I wanted perfect cuts.

So after all this ado… here are some shots of the finished unit (BTW… minis are all Calpe). Please excuse the poor photos, the weather is quite bad here in Germany right now and I had to work with artificial lighting. 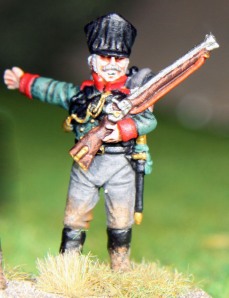