The recent posts about the minis for the La Bricole painting competition kicked off a lot of requests for my recipe for how I painted the mud. I am happy to deliver, but I have to say that it is so simple, that I am too embarrassed to call it a tutorial.

First a few words on where to paint the mud. Now while battlefields themselves can be wet from constant rain and the like, they are often not that muddy. This requires the soil to be churned up. Either from plowing, dozens of feet walking over the same spot, hooves, wheels, tracks or explosions. So this might not happen at too many places on the battlefields themselves, but it sure happens on the march or in camp. So even with soldiers just arriving on a pristine battlefield, they will be dirty. Obviously most of the dirt will around the feet and ankles, their knees (while striking tents, preparing foot or just sitting on the ground) or if you want on their behinds (usually not worth the effort since it would be hidden by the coats anyway). The exception I make are officers, since they usually had people setting up their tents, cooking their food and most of th time did not have to sit on the ground. So I only “muddy” their feet. With soldiers wearing greatcoats I also muddy up the lower edge of the coat, assuming that it would brush on the ground while kneeling, sitting down or just getting their share of mud thrown up by the shoes while walking or marching.

Now on to the actual painting. Obviously you should have painted the clothing and boots by now, or anything you want dirtied up. What you need is an old, wide brush. The ones usually used for basecoating are just fine. The hairs should not be longer than 1/2 the original length and no less than 2/3. It does not matter if some hairs are longer then others. Now you can use both synthetic or organic (red sable), but chances are good that paint will clog the brush up. So organic brushes are better since they will not melt if you need a solvent to clean them. So the brush should look like this:

Pick up paint with it and brush it out on a piece of paper until you have about the amount left on it you would need for drybrushing. Now stiple the dirty areas with paint. For the first step I use Valejo “Flat Earth” (VAL 983). This represents the mud that is still somewhat wet. 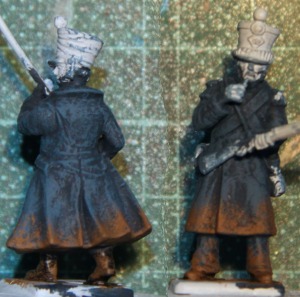 I now repeat this with Valejo Panzer Aces “Feldgrau II Highlight” (VAL 339). This represents the mud that has already started to dry. Go easier on the spots you already did since you still want “wet mud” to be showing through. And stiple some on a little higher, giving the impression of mud that splashed well… a little higher. In real life the higher you go the less will splash there, meaning there will be less new mud getting there and giving the old more chance to dry.

And that is it. I usually paint metal stuff like sword sheaths, spurs and so on after doing the mud. Assuming that there is no fabric it can soak into, I think it will not cling on as good, dry out and fall or rub off faster.

In the end the results should look like this: 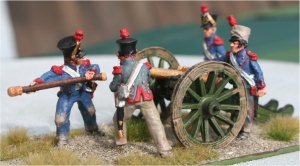 As you can see the effect works best on dark and light colours and not as good on tans and browns (what a surprise). Hope you can put this to good use!