In the run up to last weeks planned D-Day game (no new date set yet) I went and did some weathering on the landing craft. I have had these models since 2007, but the one thing that had always bothered me about them was that they looked too clean. So I went and did some weathering on them. Mostly rust-water stains. Anyone who has ever been on a metal ship or boat that is spending its days on the salt water seas will know that rust stains are almost inevitable. Obviously this will be less so on the big ships where constant maintenance is performed (like cuiseships or warships) and more so on those vessels where the crew is either unwilling or does not have the time to do constant maintenance. Since the landing craft for the D-Day invasion were in a lot of training use and had to undergo some rough handling as well (for larger transits or the channel crossing they were winched up the sides of warships) I decided to let them fall into the later category. 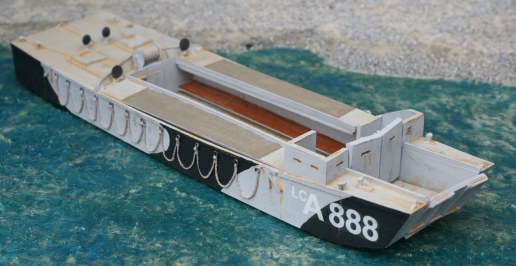 The LCA [Landing Craft Assault] was th most common landing craft used by the Commonwealth forces in WWII, filling the role for which the American mostly used the LCVP. It featured a hardboard hull, but was armoured against rifle bullets and shell splinters. It featured a 4 men crew and could carry up to 31 troops. Due to its armour, shallow draft and silenced engines it also became the landing craft of choice for the special forces… like the US Rangers who used four of them to land below the cliffs of Point du Hoc on D-Day. 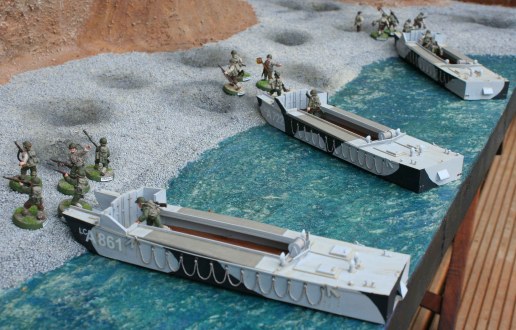 The camo of a landing craft was actually dictated by the camo scheme used on the craft they would be attached to during the channel crossing. I could not find any info on these craft here or their “carrier” so I opted for a simple dark blue over grey camo.

Although none were used at Point du hoc, I also have a LCM. So while I was weathering away, I gave it a makeover as well. 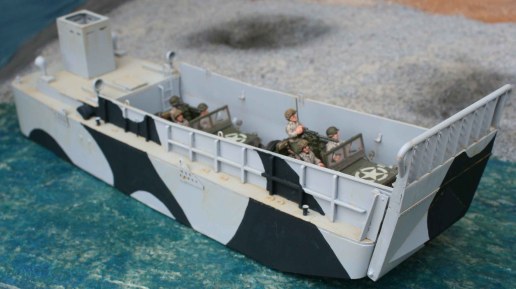 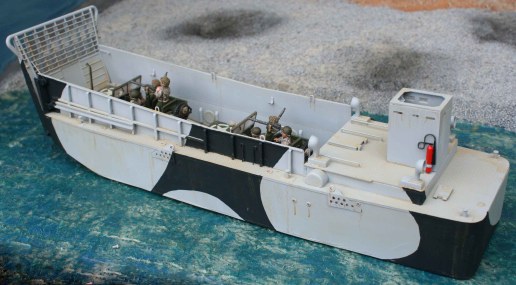 This is a LCM (rear view)

This is a LCM (3) [Landing Craft Mechanized] 1:48th scale model by Hobby Boss. It is not  waterline model so I had to cut the lower hull away and replace it with plasti-card, which turned out easier than I had thought. I build it to represent the Commonwealth version (although it is used by American troops on these photos), which differs from the US version in the placement of some minor items and lacks the machine guns on the rear deck. In real life these could carry a single 30-ton tank (e.g., a Sherman), 60 troops, or 60,000 lb (27,000 kg) of cargo.