Yesterday we met up at my place for another game of SAGA, or rather as it turned out two of them. Please bear with me on this one… we did a lot of chatting and throwing around ideas what to do for Crisis in Antwerp this fall, so my memory of some of the details is a bit flimsy at times which might make the reports a bit short.

The table looked like this: We had a big two level hill in one corner of the table and a small dark age village in the opposing corner. There were two forests on each side of the table, another small hill on the same side as the village and a walled in corn field roughly in the middle of the table. Some tree stumps, bushes and cows rounded things off. All in all it looked like this: 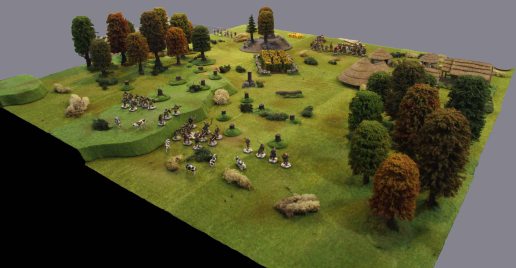 Table seen from the Viking side

Table from the Welsh side

I went for Vikings in their usual composition. Which meant my Warlord, Jarl Sigvaldi and his Jomsvikings (Hearthguard / Mercenaries), one unit of Berserkers (Hearthguard), two units of Hirdmen (Hearthguard) and one unit of Bondi (Warriors). I would amalgamate both Hirdmen units into one large unit. I have to say though, that I need to paint another two pints of Vikings so I can swap the Jomsvikings out. The composition leaves me a bit inflexible from a tactical point of view and Martin is focussing on my weaknesses quiet well by now. Or I will have to start a Norman and Anglo-Saxon Warband early.

For the first game we chose Clash of the Warlords once more. Martin deployed his Teulu units in the centre with is Warlord and his Priodaur units one on each flank.

I put my Jomsvikings on my right flank, the Bondi on the left atop the hill and the rest in my centre, with the Hirdmen forming a screen around the Warlord and the Berserkers bringing up the rear. Both sides advanced on each other during the first round. 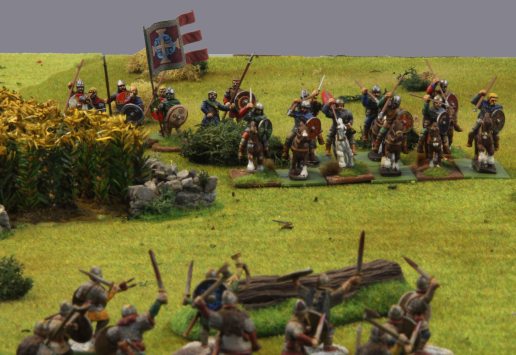 OK… they seem unafraid of the Vikings

I had expected Martin to make a concerted advance with all his units when suddenly his mounted Teulu and Warlord charged forward and loosened off some Javelins at my Jomsvikings. The Jomsvikings were quick enough to get their shields up and suffered no losses. 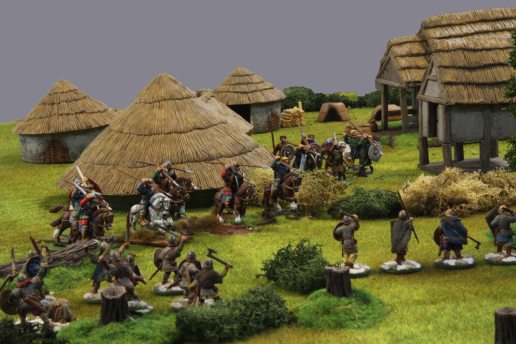 Let´s get ready to rumble

I thought that this was it, but no… both the Warlord and Teulu activated another time and charged the Jomsvikings with the use of a special ability to give them more attacks… 26 dice in total. The Jomsvikings were not hyped up yet and only got 14. To what end? Well the Jomsvikings suffered two dead and the Welsh six and had to leave with a bloody nose. 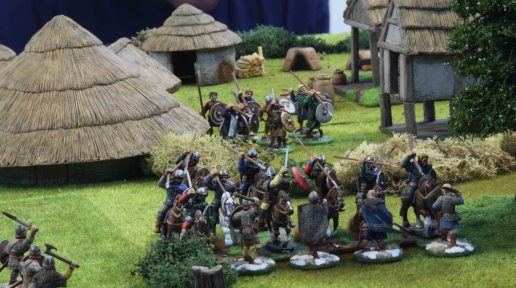 Now it was time for payback. The Jomsvikings went after the Warlord. And would have killed him if the two remaining Teulu had not thrown themselves in harm’s way and sacrificed their own lives for his.

At the same time the Hirdmen and Viking Warlord advanced leaving the Berserkers behind and charged the Warlord with the expected results. The Welsh Warlord suffered a total of 13 wounds, of which he saved none… minced meat. And the game was over after just two rounds.

So we decided to have another game… “The Escort”, which would require one side to moved at least two out of three baggage items (we went for three cows and oxen) off the other table edge. The roll of the dice would have Martin to be the escorting player and me the attacker.

My composition remained unchanged. The Warlord and the Hirdmen were deployed in the centre, the Berserker on the right flank and the Jomsvikings on the left. The Bondi formed a long line to the rear and would act as a reserve.

Martin changed the composition of his Warband though. This time the Warlord would be dismounted and only one point of mounted Teulu were in the mix. There were also two points of foot Teulu, two points of Priodaur and one point of bow armed Bonnedig (Levies). The Warlord and foot Teulu were in the centre forming a screen around the livestock, with the Priodaur securing the flanks and the mounted Teulu brining up the rear. the Bonnedig were on his right flank. 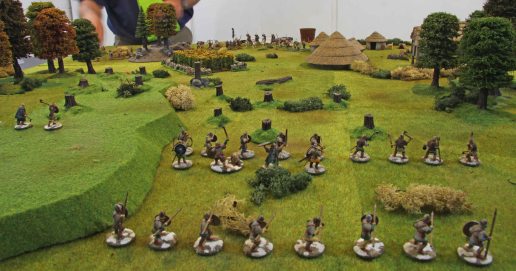 Viking deployment at the beginning of the second game

While I had enough dice to advance fast Martin did not get as many and since he had to pay for the movement of the mighty bovine force as well, only part of his force was able to advance on the first round. One of his Priodaur units started moving away from the main body in the direction of my Jomsvikings though… those four men would be in for a tough fight!

On the third round I went for an all out offense. With the two units of Welsh Teulu wedged in at the bottleneck formed by the village and field, my Hirdmen charged the first unit of them. The fight was short and bloody and the Vikings annihilated the whole unit at the loss of just one fighter. But the Warlord commanded them on and together they charged the next unit of Teulu. Again all Welsh were killed, this time at no loss of my own. The dice were really on my side ad against Martin. While the Berserkers and Bondi lingered on, the Jomsvikings charged forward  to take on the Archers before they had to face the combined might of two units. While I had allocated three SAGA dice to max their combat abilities out I rolled poorly (only a “5” from three D6) which left them with mediocre abilities. Still they managed to kill seven archers at one loss of their own. 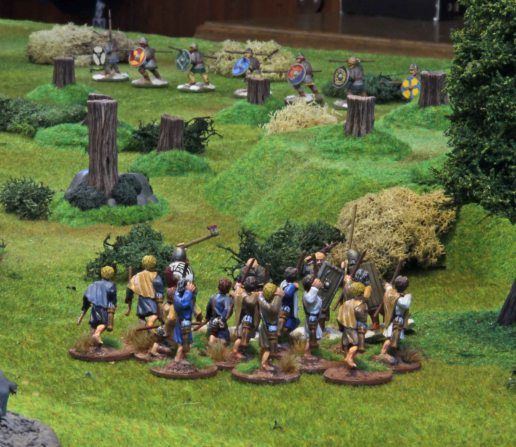 Now it was Martins turn again. His right hand Priodaur charged the 7 remaining Hirdmen and killed them all at only three losses of their own. The dice luck had turned 180° for both of us and would remain that way till the end of the game. Now my Warlord was alone in the centre and faced with a charge by the mounted Teulu. They killed him off with ease and he only managed to take one with him.

One the other flank the three remaining Jomsvikings were first subjected to arrows from the Bonnedig archers and javelins from the Priodaur that killed two more of them and left Jarl Sigvaldi alone.

But that was not all. The Warriors charged the lone Jarl and he died in heroic combat, taking three of them with him over the rainbow bridge. 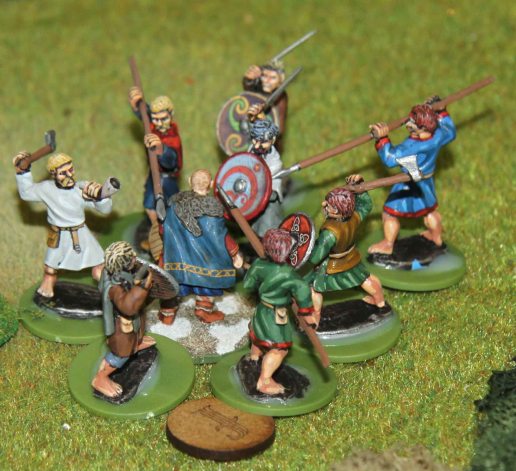 The end of Jarl Sigvaldi

Now everything rested on the Berserkers and the Bondi reserve. If anyone could pull the tables around now it was the Berserkers. They charged the Priodaur with the plan of annihilating them and then going on to the Teulu cavalry in the same turn. They never got that far. Although they managed to wipe out the Warriors, all four lost their lives. Since I had rolled no SAGA dice to activate th Bondi my activation was over. Martin advanced on, consolidating his forces. When the next round saw me rolling no dice that I could use for the Bondi again we decided to call it a day.

Even though the dice had a huge part in deciding either game, we still had lots of fun. Plus it was the first outing for the new lighting in the games room (three times as powerful and now with daylight bulbs) which in my opinion greatly enhanced the quality of the photos, too.

16 responses to “The SAGA double whammy”