20 Jan
So something different for the Challenge this time. These four models are Purple Sharks for Warzone Resurrection. I got pretty exited last year when news about a Kickstarter surfaced that would revive the old Warzone game. I have always held a soft spot for Warzone, since it had been the first tabletop I got myself into that was not played on a board, map or hex grid. I got a bit carried away, in that I pledged for at least one of everything. The Kickstarter had been hugely successful, to the level that they released a multitude of minis initially planned and that the actual shipping started later than expected, especially for those who “ordered” everything. Anyway, my minis arrived December 23rd, but due to the fact that we were visiting relatives I only got to unpack them on Boxing Day.

Sami with the WZR package
[just for size reference, Samis shoulders are about knee-high these days and he weights in at 22 Kilos!]

What drew me in all those years ago was, that a good many of the factions had some historical looks. Bauhaus was inspired by WWI Germans, Imperial by WWI British and Mishima by Ancient Japan. There were the other factions that catered more for a SciFi background and then there was Capitol. While clearly inspired by the United States, it always felt they had a hard time finding historical analogies. The 1st Edition of the game displayed them mostly in football gear. The 2nd Edition got them a bit more historical by giving some minis a Wild West feel and others a WWI feel as well. Now that did not go down too well with the fans (I liked it) and I was looking forward what this new edition would do with them.
Now they did give all the factions more of a modern SciFi´sh look, while still retaining the steampunk feel and Capitol is no different there. But with Capitol they still seemed to be struggling with the historical elements. So one can find some elements of modern soldiers in them, but also some WWII and Vietnam elements.

Now to cut things short, I feel the Purple Sharks, which are some light attack fighter craft, there were some strong WWII looks and I tried to capture that. So for their basic colors I went for a plain metal look like seen on some P-38 Lighting and P-51 Mustangs during WWII. I gave it some staining to make them fit the gritty feel of the setting. Now with the before mentioned fighter craft, they usually painted the propeller cone, intakes and rudders in bright colors. I decided to pick that up here too  and painted some parts in purple to fit the crafts name. And last but not least they got some nose art (or in this case body art) depicting scarcely clad women to round off the world war feel. The first of them ”Martin Belle” is a homage to the “Memphis Belle” given the fact that the Capitol Corporation is based on Mars. The second one ”Iron Irene” refers to the code word that started the fateful operation by US Special Forces in Somlia in 1993. It does not fit the general WWII idea, but for some reason I felt it would fit. The other two names contain references to regions on Mars. “Hellas Hellen” to Hellas Planitia and ”Ausonia Angel” to Ausonia. 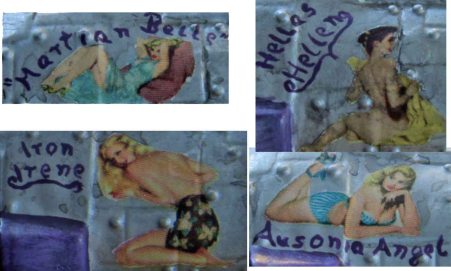 The colors for the Uniforms were again inspired by WWII Americans, going for mostly tans and greens. This fits my other ideas for Capitol troops quiet well. While the background for the game always depicted Mars as featuring red deserts, I want to give the planet more of the look that can be seen on the pictures transmitted by the Mars Rovers Spirit and Opportunity. They show a landscape dominated by tans and browns and this is what I want myself (plus it will fit the desert table mat I want to build later this year). I went that way with the baseing as well… tans and browns plus some dry grass to show that while Mars was terraformed, it is still hot and barren.

I always love painting some jewel effects on lenses and so on, so I took the opportunity to do that with the visors on the pilots helmets. Unfortunately it does not really show against the green helmets.

For those of you wondering about the other entries, here is the link to the special page Curt set up for the first fortnight theme and for people to cast their votes for favourites.
As a side note… as I said, I got a bit carried away while pledging (see the size of the box in the first photo and that is still missing the second wave minis). As such I have decided to part with those factions that always interested me the least. So if anyone is interested in a complete set of Cybertronic and / or Brotherhood, drop me a line. If anyone wants to pick a complete faction I will part with them at below Kickstarter prices.