RSS
← Giveaway minis… they are done and ready to go in the post
Duchy of Warsaw 3rd Line Infantry, 1st Battalion →

Last Sunday Ingo came around for a match of Warzone in our mini league. Essentially this was the top of the table match, since we botch won our first match last month. As with every game, this too was played using the advanced game rules, at 1000 points using the standard OOB. We rolled a Bravo Mission which meant in addition to the Primary Mission (Supply Run) we also had a Secondary Mission (Vital Intelligence). The former meant that there were three supply markers along the centre line. If one was to manage to carry two of those into his deployment zone by round three or later, he would win. One marker in the deployment zone and possession of another would mean a minor victory. The Secondary Mission meant that there was an intelligence marker on the centre line. A miniature had to spend a complete round touching it to retrieve the intel for five bonus points.

The table was dominated by a huge ruined church with a hedge-lined graveyard on one flank, while there were two small woods on the other flank and a cornfield in the middle. Otherwise there were some bushes strewn over the table. Background wise we said that both forces had been send to investigate the reported destruction of a minor cathedral on Venus and while not at war with one another, the forces met  in the morning mist and assumed that the other was the enemy and therefore started firing at one another. 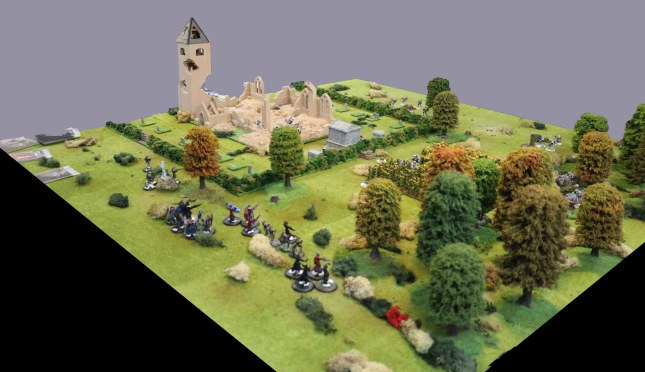 Table seen from the Brotherhood side

Table seen from the Bauhaus side

So what did we field?

Mine, the 23rd Gebirgsturmbrigade the “Fenriswölfe”, used the same force as last time. Max Steiner as Warlord, with two six-men squads of Hussars with one LMG each and Scout training, two five-men squads of Venusian Rangers (both Squad Leaders had Medic Training) with three rocket launchers between them and a three-men squad of Vorreiter.

Ingos force was led by a custom Inquisitor Warlord.  There were two Trooper Squads, both with two snipers each and an Inquisitor Squad Leader, one squad of Sacred Warriors led by Lukas and a squad of Mortificators. To round things off there were two squads of Inquisitors one with three and the other with four men.

Ingo won set-up initiative, but decided to let me set up first. So I deployed my Hussars one squad on my left flank, the other in the middle, with the Vorreiter between them. Ingo deployed his troops all in the centre and one squad of Troops on the right flank opposite the church. The Warlord was deployed in the rear surrounded by Sacred Warriors, and Inqusitors to protect him from harm.

Hussars in their starting positions

Since I had to set up first, first initiative automatically went to me (the only initiative I won during the game) and my Vorreiter moved forward and engaged the Mortificators. Despite of a total of nine hits with the vehicle mounted HMGs only two died on account of their ability to dodge and armour. Ingo activated the Sacred Warriors and through a combination of a tactical card and a spell cast by Lukas this left Max Steiner unable to fire that turn or directly claim cover to hide behind. So Max tried to get out of sight completely, but since his route was blocked, he was unable to do so and tried to at least get as much cover between himself and his shooters as possible. But to no avail. When the first squad of Inquisitors activated he received enough hits (one of them critical) to leave him dead. Things did not go well for me for the rest of the rounds either. The Mortificators attacked my Vorrreiter (which lay the groundworks for one dead the next round) and my left hand Rangers through the cornfield, which left three of them dead, while the Rangers themselves had no luck attacking the Inquisitors opposite them. Their brethren in the church did not fare any better. Also three dead (including the Squad Leader who was carrying the supply marker) at the loss of a single Brotherhood trooper. This was especially frustrating, since the Rangers from both squads were using enough cover to give them protection between +6 and +10 (on a D20)! All our other troops just advanced. So where did this leave us. Well I was down about half of my points and ⅔ of my resources, while Ingo had lost only a minimal amount of troops. Not good!

Venusian Rangers in the church ruins

The next round began with the Mortificators going into void to avoid being fired at. So my remaining Vorreiter moved forward and fired at the Inquisitors, but with only limited success, since they shifted hits around within the squad, so the best they did was cause some wounds. At least they took the incoming fire in stride, with all hits being spread all over their hit locations. My Rangers in the centre engaged in a slightly ineffective firefight  with their opposites, with no side suffering any losses. Things did not go so well for the Rangers on my right flank who perished only taking the two Brotherhood Trooper snipers with them in the firefight. Again my Hussars just moved forward to get towards the supply markers. The squad on the left had one of the troopers and the LMG go into sentry mode, to protect the rest of the squad from the Mortificators should they pop out of void.

The next round saw the Vorreiter charged by a squad of Inquisitors each. Again they stayed alive, but took more damage, while one only dealt out a wound himself, with the other disengaging to be able to fire next round (which he never got the chance to do). In the centre one of the remaining two Rangers was cut up by a Sacred Warrior in close combat, the other was shot up while trying to run for the supplies on the left flank. While the Venusian Rangers had booby trapped the area around the cornfield, the Sacred Warriors were able to virtually ignore this on account of their high armour. The Hussars in the centre managed to pick the supply marker up and started carrying it towards their own deployment zone.

The next round things really started spiraling down. Both Vorreiter died, the one in close combat at least taking an Inquisitor with him. The Hussar Squad leader on the left picked up the supply marker and started to make a run for it. Unfortunately through the use of a tactical card his squad lost the ability to fire (rendering the models in sentry ineffective). At this point the Mortificators came out of their void and ripped into the Hussars. While the Squad leader lived, he saw his squad perish around him. At the same time the other squad of Hussars moved back towards the deployment zone with the supplies. Just two inches short of it, the Hussar carrying the supply marker was hit by a spell (at maximum range and despite three pieces of intervening cover) and disintegrated. So essentially two inches had separated me from a minor win at this point. The next round saw more Hussars die in the centre, I lost the chance to pick up the supplies that now lay so preciously close to the finish line with less than two rounds. When the squad leader on the left flank also died carrying the supplies, I lost all chance for a victory and we called it a day.

Hussars making off with the supplies

All in all it was a bit of a frustrating game (just the game, not the opponent). I found that it is really hard to make a normal (Bauhaus) Warlord survive long enough, when one is playing forces that have the ability to deny you cover. So although I always said it was cheesy to play a custom Warlord, I think I will have to go down that route in the future. Another bummer was the fact, that my Ranger died like flies although they were making real good use of cover. The fact that out of nine Inquisitors only one died, while all the others were down to one wound was bad as well. Add to this the luck of the dice and the fact that victory was snatched from me by just two inches this sure was no fun. 😦 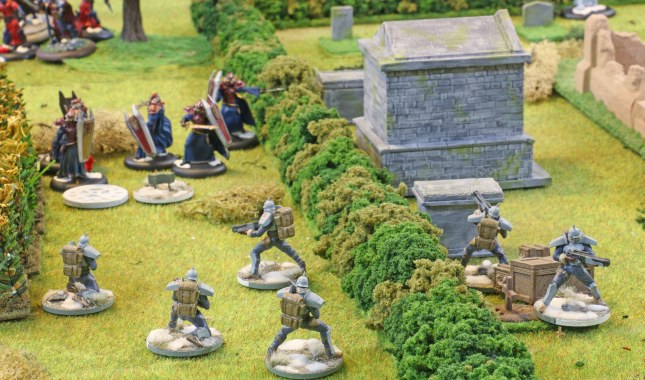 Snatching up the supplies in the centre

Up tomorrow we will have the 3rd Duchy of Warsaw Line infantry for the Napoleonic wars… after two weeks in the mail their flag finally arrived today, so stay tuned!

← Giveaway minis… they are done and ready to go in the post
Duchy of Warsaw 3rd Line Infantry, 1st Battalion →