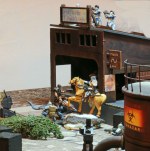 Last Sunday Andreas and myself met for the final game of our Warzone mini league. And mini it was indeed, for this season there were only 5 players which meant a meagre 4 games for each of us. I actually planned to post this a couple of days ago but I was down with a flu most of tis week, so it took a bit longer. Also my apologies for the report itself. The flow of the game was pretty strange, so it is a bit hard to report on it. Hope it will still make sense to you!

The game was played out in an abandoned mining outpost. Most of the terrain was open, with three large buildings, a large tank and acid waste canal, some crates, bushes and a few fences (essentially these blocked off the far left of the table).

Our primary mission was a resource grab. Meaning there were three resource marker along the middle line of the table, of which we had to get two off to our deployment zone to win. We also had secondary objectives. In Andreas case he would have to have troops on the highest roof by the end of round eight, while I had to find an ammo dump at one of the three locations already markered and blow it up. In addition we both also had corporate agenda objectives. I would have to kill three times as many points with one of my squad leaders as he was worth himself, while Andreas had to lose one of his (both Leaders had to be written down before the start of the game). Lets just mention here, that neither achieved his mission. Mine was killed the first time he was shot at and while I fired a lot at Andreas Squad Leader he simply would not die.

So what did we field?

Andreas was playing Dark Legion: A custom close combat Necromutant Warlord led his force consisting of two squads of Undead Legionaries (without heavy weapons and led by Necromutants), two squads of Necromutants, 4 Nasca Razides (two on their own and two in one squad) and two Necrobeast Riders.

I won the set-up initiative, but chose to let Andreas deploy first. He spread his troops out evenly in his deployment zone. My large squad of Hussars deployed in the middle of the board, while the small one deployed on the left flank together with the Warlord. Since Andreas had no infiltrating troops my Rangers deployed their booby traps in the middle of the board. One squad each deployed right on the left and centre objective markers, while the third deployed 4 men on the highest roof, with the last Ranger in contact with the right hand objective marker.

The game started with Andreas playing a strategy card which meant that unless my Troop types (Hussars and Etoiles Mortants) used just one action this round, they would take automatic hits and therefore potential damage.  On this first round I therefore just advanced my Hussars slowly and decided not to deploy my Etoiles at all.

None the less Andreas put a lot of his troops on sentry to safeguard against a deployment of the Etoiles Mortant. The unit of Rangers on the right saw the trooper in contact with the objective marker carry it off into the warehouse. His comrades on the roof either had no targets in range or in sights, so two of them just went into sentry as well. There was also an artillery strike card I played on the Dark Legion deployment zone. This was cancelled by a card Andreas played, at the price of his Warlord taking a wound (later in the game he would use the same card once more, again rolling bad and taking a hit with his Warlord). 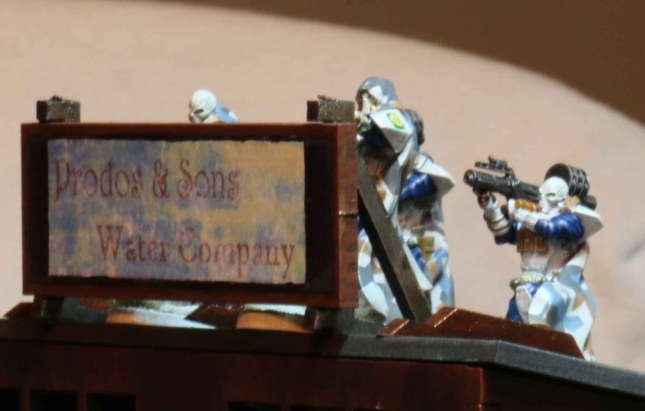 The Venusian Rangers on the left picked up the objective marker and started making for the rear. This did not work out too well. While they were at the extreme end of the weapons range, three of them were still killed by weapons fire (including the squad leader carrying the objective marker by a natural one on the to hit roll [which allows no saves at all]). The Venusian Rangers in the centre had already lost one of the two men in contact with the objective marker, when they found that this was the location of the ammo dump as well. The remaining trooper just chose to set explosives to it and make for safety. Before the end of the round, they would see two more of their squad killed (again the squad leader by the roll of a natural one). The round ended with the Necrobeasts climbing the roofs of the near buildings. The two Venusian Rangers on the roof used their Sentry to fire at one of them and even though they had no AT weapons, they even causes one hit, which was unfortunately repaired at the beginning of the next round. 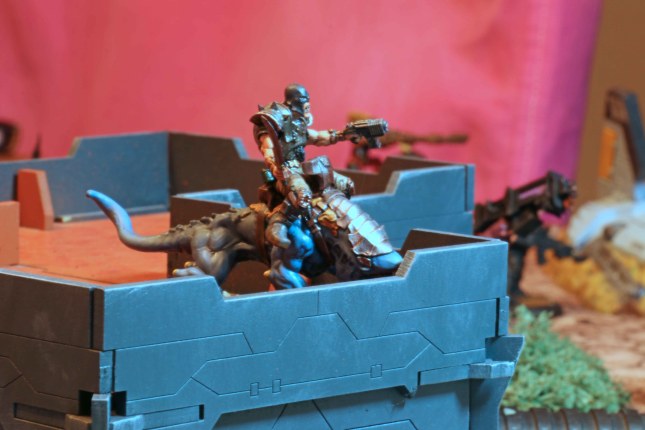 Necrobeast rider after climbing the roof

The next round saw Andreas win initiative again. Before much could be done, the Necrobeast charged forward (destroying two of the booby traps in the progress). One of them charged and killed the Venusian Ranger inside the Warehouse who was carrying the objective marker. The other Necrobeast rider fired a few shots at the Venusian Ranger on the roof, killing the Squad Leader (guess what he rolled… a natural one). I played a card on the Necromutants on the left flank that would see each of them killed generate a supply token for my Kaptain. With this in play, the Etoiles Mortant deployed near them and killed four of them, two Undead Legionaries from the adjacent squad and a Nasca Razide.

The other unit of Etoiles would later in the same round deploy in the centre of the Dark Legion deployment zone taking out 5 Undead Legionaries three Necromutants and damaging another Nasca Razide. This now forced the Dark Legion to clear them out, which took most of this and the next round, but eventually saw all of the Etoiles dead with them “only” being able to kill one more Necromutant. In the centre the Hussars now tried their best to kill or at least tie up the Necrobeasts. The Kaptain used two of the supply tokens to give the LMGs At capability for this round. I also raised their rate of fire, but out of their six shots, they failed to even score more than a single hit. To add insult to injury, this hit did not even cause damage.

Two of the Hussars ran into the warehouse. One to carry off the objective marker the next round, the other to tie Necrobeast rider up in close combat. Outside two of the other Hussars (they got the other two supply tokens to give them AT capability) fired at the other Necrobeast, but while they hit, they failed to do damage. One more Hussar and the Kaptain charged the Necrobeast in the open, but again failed to do damage. The rest of the squad just advanced towards the objective markers. The Venusian Rangers from the centre and left squad had taken more damage from the Dark Legion troops in the deployment zone (before the second unit of Etoiles Mortants dropped) which saw the centre unit annihilated and the left one reduced to one man who ran away.

The other units just advanced as best as they could, with the Hussars trading some shots with the Necromutants left by the first Etoiles Mortants attack.

Now the next two rounds are hard to describe. As I said before, it consisted a lot of the Dark Legion mopping up my Etoiles in their deployment zone. The Hussars slowly battled it out with the Necrobeasts, but while they did no damage, they started falling one by one (including the Kaptain). This was only made worse by the fact that they became subject to the same card they had been at the start of the game (the one that meant they potentially took damage if they use more than one action). Having to secure at least one of the objective markers and having to fire at the advancing Dark Legion troops, four of  them had to take this risk. While for minimal gains, three of them actually took damage and died. 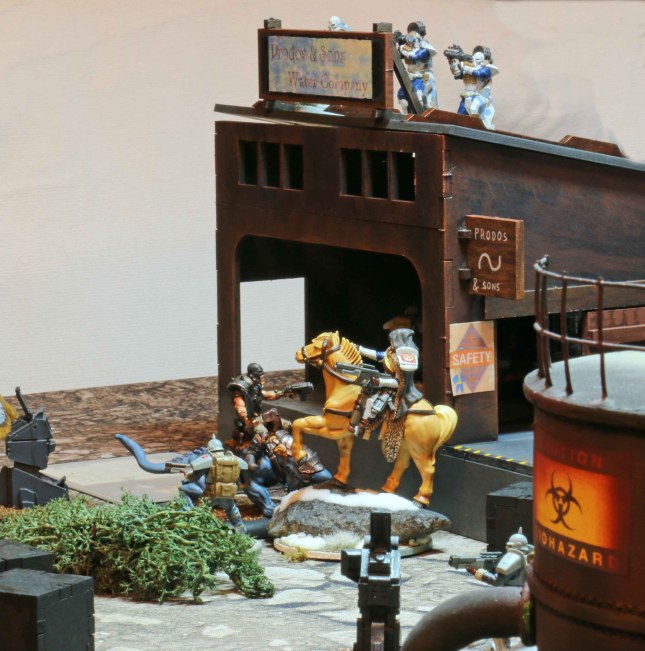 Once done with the mopping up, the remaining Nasca Razides and Necromutants moved forward. One of the Razides was killed the other damaged by the remaining booby trap, but two of the Necromutants threw grenades at the Hussars. The one who targeted the Hussars in the centre did surprisingly little damage for the high strength of the grenades, but the one who targeted the ones on the left wiped out virtually the whole squad. No matter what the grenades also reduced the attack skills of the remaining Hussars to half for the rest of the round. And one by one the Venusian Rangers on the roof were also killed by fire. In the following round, the few remaining Hussars managed to take out the two Necromutants who had attacked with grenades. The fleeing Venusian Ranger, who had previously recovered his nerves, returned and carried one of the objective markers off to the deployment zone.

At this point we were both left with shambles of our forces. I only had my Warlord, the odd Hussar and one Venusian Ranger. Andreas had his Warlord, the Necrobeast Riders, two Nasca Razides (one of them damaged) and less than a handful Necromutants and Undead Legionaries. At this point I had already completed my secondary objective, but I held no illusions that I could prevent Andreas from achieving his. Neither of us could complete the primary mission (I did not have the troops left to carry a second marker to my deployment zone and all the markers were too far away for Andreas to do so). So at this point, we decided to call it a day and agreed on a draw.

So this was my last outing in this mini league. With a win, two losses and a draw this left me on a shared third place together with Andreas in the total ranking (not too representative with so few games anyway). And this was also the last outing for my Bauhaus troops for the near future (unless for some non-league games). For the next season, starting in February, I decided to play Imperial. So you can expect me to showcase some of those troops soon.