As I indicated in my last post, now that our Warzone mini league is done for this year, it is time to start planning for next years. For that one I will switch from Bauhaus to Imperial, so it is time to start painting units. Forming the nucleus are the Golden Lions. Now I could go into their background, but Prodos showcased them on BolS this week, so I am just going to beg, borrow and steal their description:

Imperial is well accustomed to inter-corporate war. Their attitude towards the Bauhaus and Cybertronic Corporations are a constant frustration for the Cartel, who are left to clear up the mess left behind, both on the warzones and the in the Corporate Boardrooms. The Imperial Corporation’s domination strategy against the other megacorporations seems to centre on fielding mass infantry and entire divisions of vehicles to quickly overpower the enemy. Even though this battle tactic from the smallest, yet fiercest, corporation has become expected, it is near impossible to counter. In cases where the opposition are prepared for such military tactics or they have resisted the Imperial hammer blow, the Imperial Golden Lions are mobilised. The Golden Lions were formed alongside the infamous Blood Berets by Clan Murdoch during the Venusian Crusade. Unlike their Blood Beret kinsmen though, the Golden Lions receive little glory and their notoriety, in converse to their Blood Beret brothers, has significantly negative connotations. Any praise they have received is logarithmically overshadowed by controversy. The Golden Lions were formed with the intention of fighting other corporate soldiers. Their training and wargear is specifically designed to counter human opposition, armour and biologics; as such they are seen as the black sheep of the Imperial Corporation, which is rightly ashamed of them. Ashamed to the extent the Golden Lions have on many occasions been very close to being disbanded. Recent policies, however, have shown not only a need for the Golden Lions, but a blatant want too.

Painting wise they were something of a tough nut for me. Their armour is usually depicted as red. Past editions often showed them with grey and black tigerstripe camo, but with the strong facets of these models I chose a plain red. The end result was a bit lighter than I had wanted, but I still liked their looks. At first I went with a bronze for the gears on their legs and arms, but after I had done the first three, it dawned on me, that there simply was not enough contract with the red, so I went with a dark gunmetal-grey, the same I used for the engines on their backs and the plasma weapon on their right arm. While that provided more contrast, I still felt it was not enough, so I blocked the shoulder plates in a dark green (after all, if red and dark green is a good contrast for Santa and his Little Helpers… ;-)). But I am still contemplating adding a golden edge to the shoulder plates. The last big problem the red gave was the berets. Usually those are depicted as a blood-red, but with the lighter colour of the skin and gas masks, I felt going for a very similar red would tone contrasts down again. So I went for a maroon red, just like with the British Paras. Imperial is modeled on Britain, so I thought… why not! 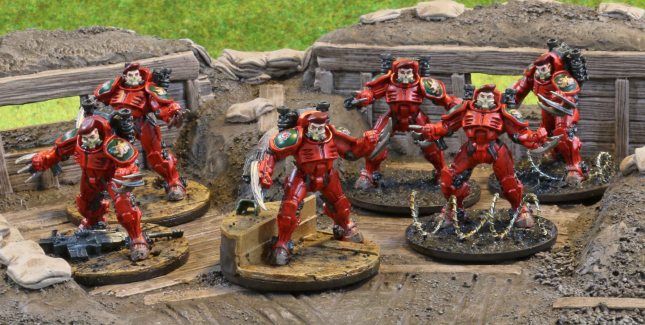 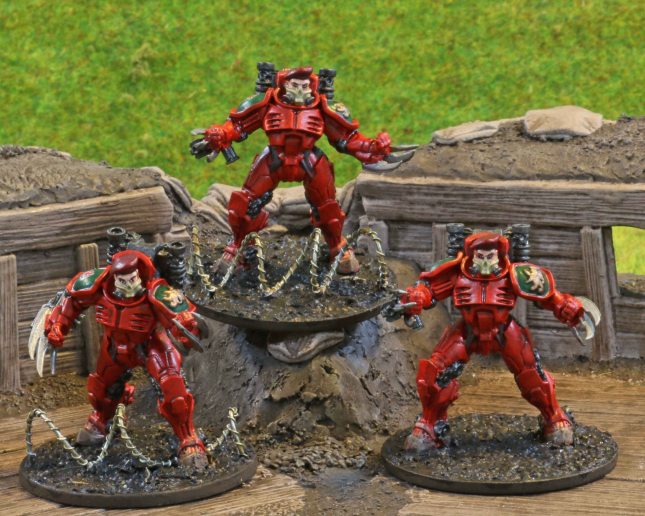 My Imperial troops are going to get a WWI like trench theme for their bases, So half the minis are standing on muddy bases with some barbed wire, while the other half have trench bases (the one who will act as squad leader with a firing step). The later also got some debris on their bases. A Capitol shoulder pad and heavy weapon I had left over from the Kickstarter on two of them and some rats (from Black Cat Bases) on the third. 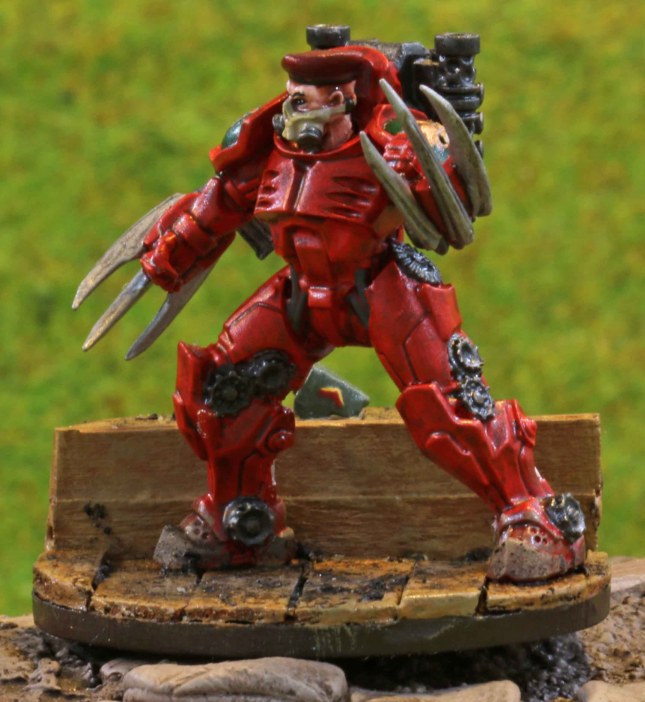 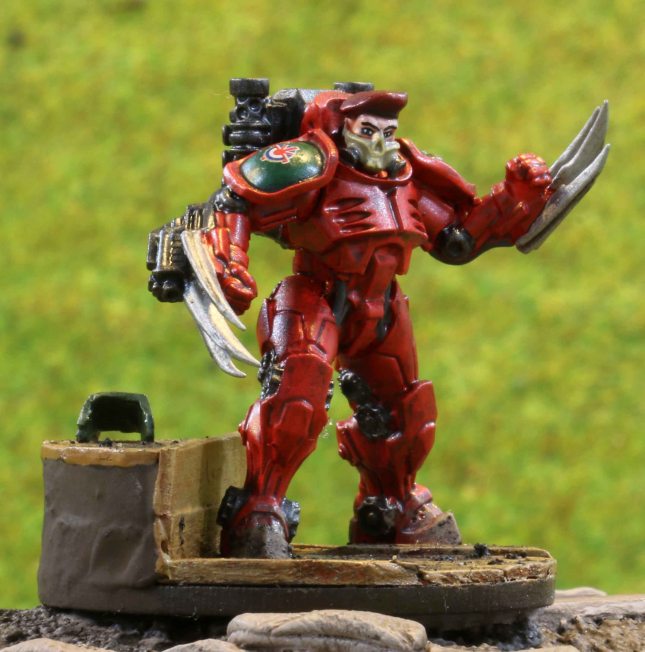 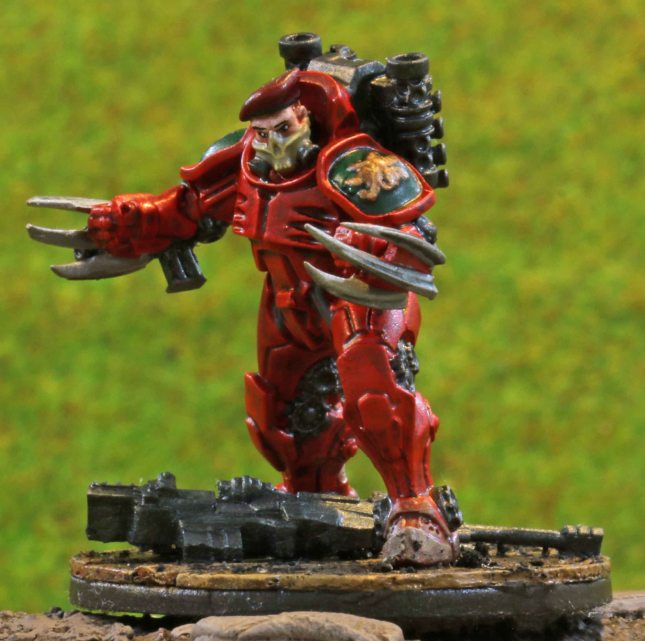 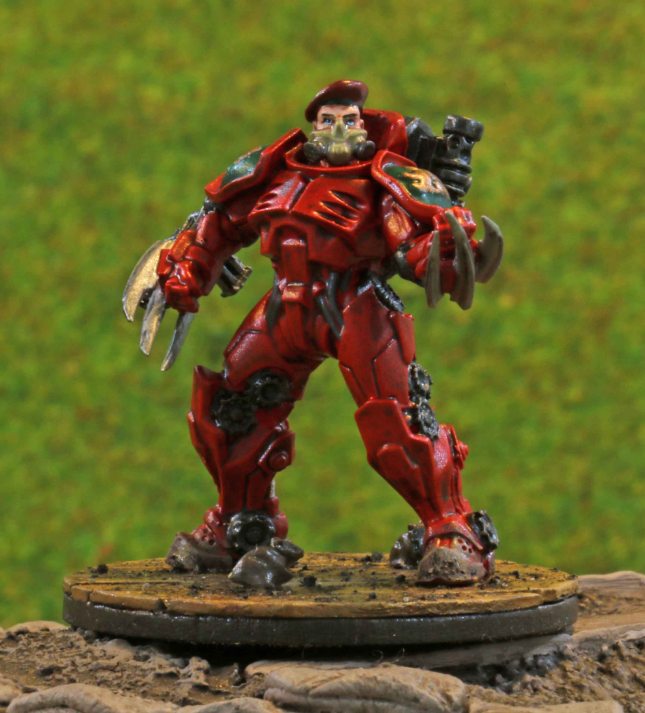 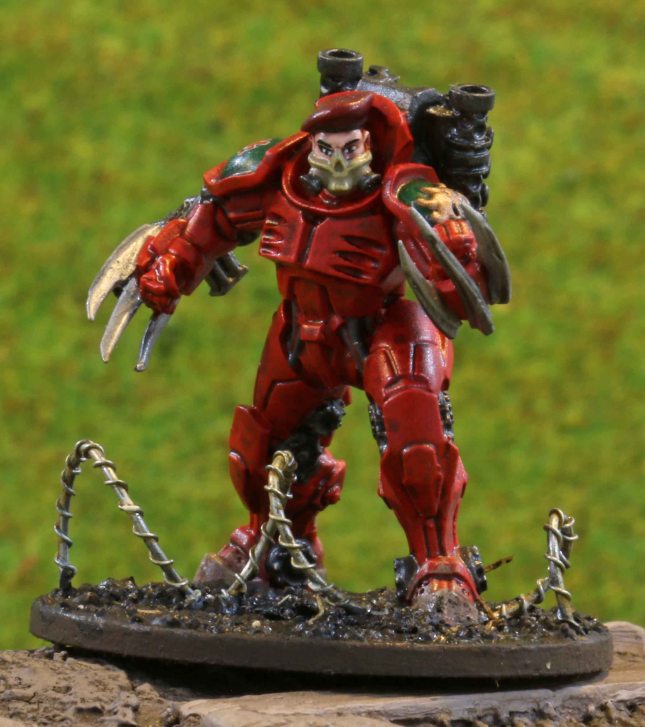 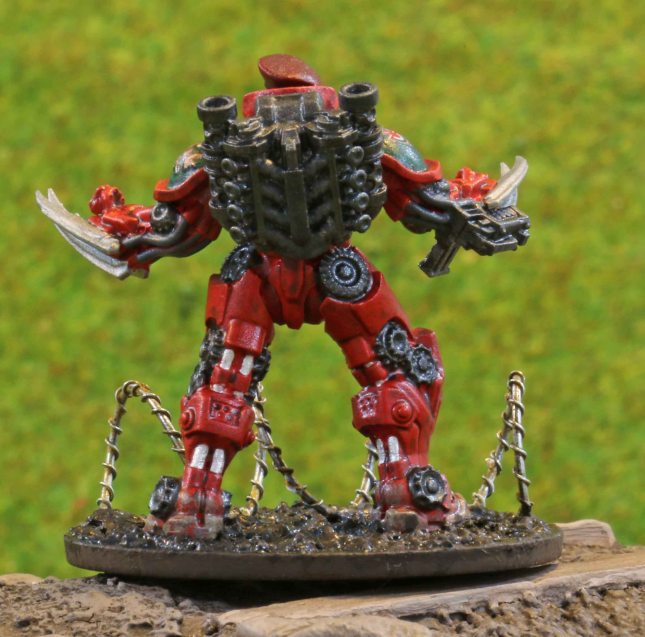 Hope you liked them. Not sure what will come next on this blog. As I did the past two years, I will be taking part in Curt’s Analogue Hobbies Painting Challenge once more. Last year the theme rounds always pushed me out of my painting flow, so I plan to paint everything for those first (probably still in December) so I can just do what I want till the Challenge ends in March. Right now this means cleaning up a lot of minis so I can hit the ground running. In addition, the rules of the Challenge say, that I am not allowed to post anything here, until it has been posted on the Challenge. Between those two facts (plus the fact that it will be my birthday this week), it might get a little quiet over the coming days. But I will still try to paint something after I cleaned the last of the minis up and before the Challenge starts on December 5th! Lets just see! 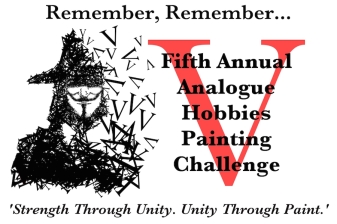 Posted by Burkhard on November 22, 2014 in Imperial, Sci-Fi, Warzone Resurrection