“Wait?” you will shout… “Christmas game… it is only October!” And rightly so! But, as I have had to say so many times this year, I seem to have huge problems keeping this blog up to date. So, here it is, almost 10 months late:

Between Christmas and New Years last year Julian, Martin and I met up for a little game of Battlegroup Fall of the Reich. Please do not ask for the exact composition of the forces… it has been a while. But if I remember correctly, the Americans had a mix of truck and jeep mounted infantry, M10´s, Shermans and Greyhounds (the burning Stuart was scenery). The Germans were a rag-tag bunch of Panzergrenadiere, a Volkssturm platoon, two Hetzer, a Hornisse, a Luchs, a SdKfz. 251/22 and a SdKfz. 250/9. Both sides had some off-board artillery.

Table seen from the German side

Table seen from the American side

We rolled to see who would play which side and Martin got the Americans and Julian and I the Germans. We were playing the Road Block scenario and the Americans were allowed to set up the majority of their forces as far as the river. Martin put the armoured command car on he bridge with the M10s, some of the truck mounted infantry and a Dozer Sherman behind them. The Greyhounds were allowed to deploy on the German side of the bridge.

The German Volkssturm was dispersed throughout the village and one of the fields on the flank. The Panzergrenadiere and Hetzer were hiding inside the village, while the Hornisse was waiting at the edge of the village with the bridge in sight. We took a slight risk as the German players, by not putting any scout units on the table, which meant we would start the game by drawing a chit. In retrospect this was the best decision we could make, since we drew a breakdown counter, which we played on the armoured command car on the bridge, which got an immobilized result. So Martin had to start shuffling vehicles around to get the Dozer in position. 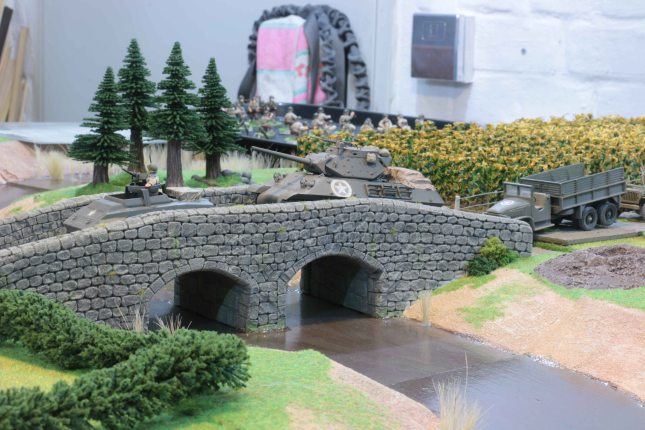 Things are about to get tough

But while he was doing so, the Germans called in some artillery on the bridge, which took out the command car for good and set the M10 ablaze. So when the Dozer arrived, it had to start by pushing the tank destroyer aside.

Getting the other vehicles out of the way for the dozer

Getting the M10 out of the way

But this was not the only problem for the Americans. when it was clear, that the bridge would be blocked for the foreseeable future, the Greyhounds chose to dash into the village to hide. Which proved to be a bad decision, since the lead Greyhound drove past one of the buildings where the Volkssturm was hiding. A Panzerfaust into the rear was a reward, after which it blew up. 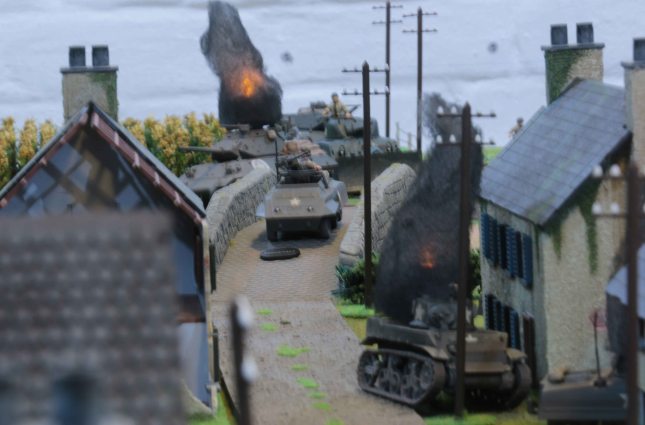 First moves inside the village

All in all it took the dozer three turns to even get into position to try to clear the command car off the bridge. During that time the came under constant German artillery fire. To minimise their losses, the American infantry dismounted to disperse and get across the bridge. 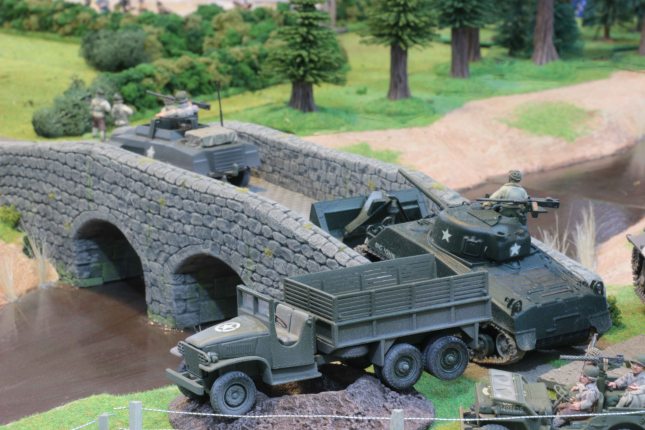 Sherman Dozer about to clear the bridge 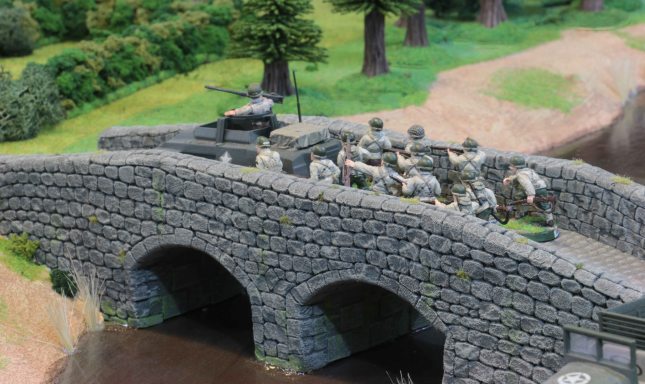 American Infantry pushing across the bridge

But while doing so, the American infantry became pinned by fire from the Volkssturm in the fields.

Volkssturm firing at the American infantry across the river

And to make matters worse, by now the remaining German armour had arrived on the table and were taking up positions to counter any American moves off the bridge.

German halftracks staging inside the village

Luchs and Hetzer securing the flank

With the bridge cleared, the Americans finally managed to get their own spotters to a place where they could actually call in effective artillery fire on the German spotters killing them, but it was too little, too late. By now the Germans were in positions where they could target anything moving across the bridge from three sides.

Hetzer moving to the front

By now the American force was close to breaking to breaking anyway. And when the Dozer started to push the command car, i was hit by an eighty-eight shell from the Hornisse. 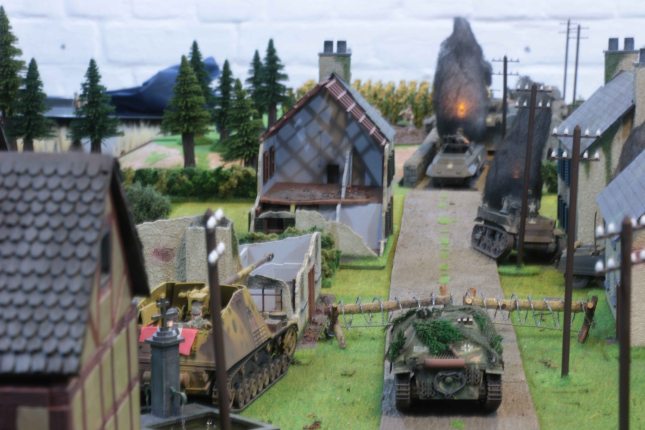 At this point no coordinated push would have been possible anymore and the Americans withdrew.

← British WWII Paras
And another game of Fall of the Reich →

4 responses to “Battlegroup Fall of the Reich Christmas game”