Work is still ongoing on my German early war (Poland to Barbarossa) project. It is amazing how many vehicles one actually needs for this fairly short period. Between all these and the ones I posted last year, there are still lots to do. All of these were done over the fall to early spring period of this year.

Up first is the SdKfz 222 from Blitzkrieg models. Really nice model. The only thing that disappointed me a bit, is that it comes with sand tyres, which would fit a model for the Afrika Korps, but not Europe. Fortunately I had the SdKfz 260 kit from ICM, which comes with two sets of wheels. Both with regular tyres and even though the plastic version is already great, there I a rubber set. So one of these was fitted to the SdKfz 222. 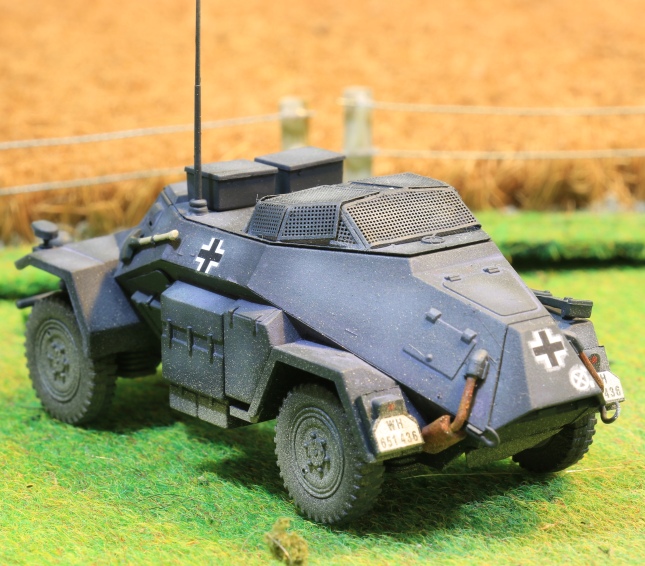 This is the above mentioned SdKfz 260. Unfortunately it has no place in the Battlegroup lists, but I simply liked it looks too much! We have already used it as the ride for the Luftwaffe liaison officer (who usually rides a half track) and it worked out fine.

And here is a bunch of PzKw II. The ones in the top picture have early turrets (commanders hatch) while the ones in the lower two photos have the late turret (commanders copula). In retrospect I should have asked the people at Blitzkrieg if they would sell me three hulls with two different turrets each, since it was lots of work painting six similar hulls, but one always has these ideas when it is too late.

And to round things off with the PzKw II family, here is a Flammpanzer II Flamingo. This model is also from Blitzkrieg.

And then there is the transport for the Grenadiere. Personally I prefer halftracks, but those are more expensive points wise and unavailable for Poland, so I needed some trucks. In this case a bunch of Opel Blitz from Tamiya. The drivers (mostly invisible on these photos) are by Victory Force, the soldiers themselves by Warlord. 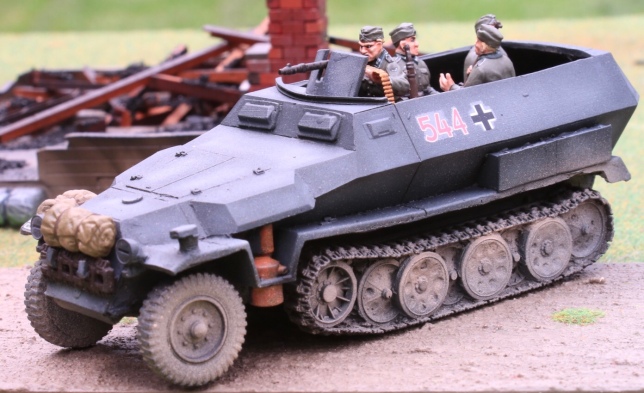 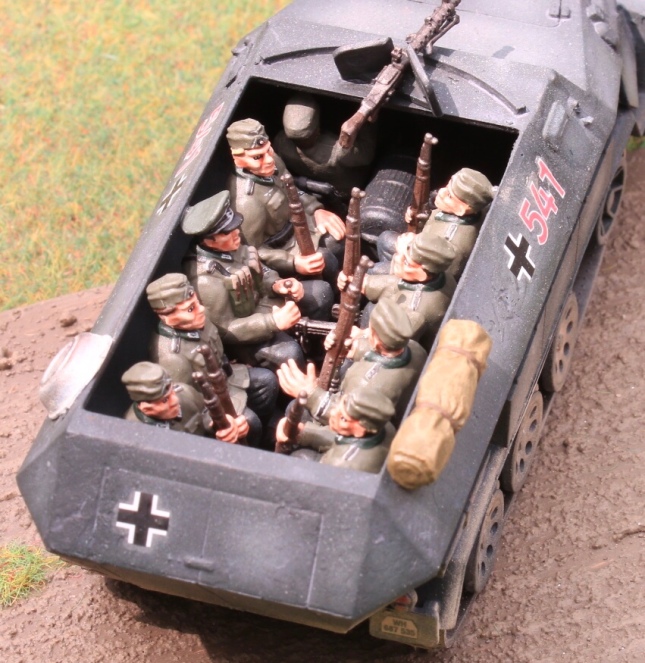 And then there are the halftracks. The commanders halftracks is an old Bandai model (by now repainted for the second time). It is a SdKfz 251 B. Not sure if such a mix with the SdKfz 251 C models for the rest of the platoon is realistic, but I am thinking that maybe the unit got a small batch of earlier models first that were allocated to the commanders, while the rest of the troops got theirs later. The C models are by Blitzkrieg. The Grenadiere are by Warlord and the machinegunners are from Rubicon, but with Warlord heads to hide their slimmer shape.

To give the troops some supplies there is another Opel Blitz by Tamiya. The guard is by Warlord Games. The supplies are a mix of Tamiya and Bandai. Not sure if there are too few supplies. Maybe I need to add to it.

And last, a tripod mounted MG-34. The machine gun and gunner are by Victory Force, while the spotter and loader are Warlord Games.