Over the past few days I needed a slight break from Napoleonics. Amongst other things I finished the AT team and the vehicles for my modern French, thus completing the unit. Some words on them first. I wanted to be able to use them together with my modern Germans, so I decided to have them depict men from the “Deutsch – Französiche Brigade” / “Brigade Franco – Allemande”. In that sense they wear the blue barrets of the Brigade. Since the French fighting units of the Brigade are the 3ème Régiment de Hussards and the 110ème Régiment d’Infanterie and their vehicles are quiet light.

So I chose two Véhicule Blindé Léger [VBL] and one Véhicule de l’Avant Blindé [VBA] for them. While the former is part of the HQ or Recon elements, the later is part of the infantry elements. None the less I did not feel that they would not appear on the battlefield together, so I shall use them side by side. The models themselves are Schuco die-casts. I touched up some parts and airbrushed some dust on, but that was it. One of the VBL´s got a Milan launcher and spare rocket from Eureka. Before you ask… yes it fires to the rear on the real life vehicle as well (now I can see jokes coming there). 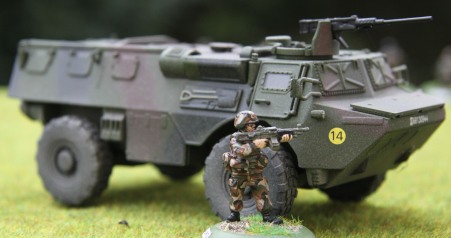 Now on to the infantry. The minis are a mix of Dadi & Piombo (D&P) and Eureka Miniatures. I have to say I liked the later better. D&P only have four poses and just the basic squad weapons. The Eureka minis have more variation, mortars, rocket launchers… and they feature more kit, giving them a real life look. Sizewise they mix real well though, so I did not care too much.

One thing I noticed when cropping the pictures for this post… I really need to go back and touch up some of the eyes. They did not look half as bad IRL, but the camera is unforgiving. Anyway… here we go:

Now all the minis aboce are Eureka. I am going to mark those by D&P accordingly.