After a long hiatus brought on by both the holiday season and work, Martin (with a little help from his son Max) and I were finally able to get another game of SAGA under our belts.

We went for a table with open terrain and just a few fields, trees and hills. The most restrictive terrain was a creek cutting off one corner of the table and a Viking village in the other. But to be honest, the terrain played just a small role, except for the fact, that I used the creek to hinge my flank on.
Martin and Max played Normans in what has now become Martin’s signature set-up. A mounted Warlord, four units of mounted Knights (Hearthguard) and two units of Sergeants (Warriors), one of them armed with crossbows. Martin would amalgamate two of his Knight units into a large one.

I wanted to try something new. While the Byzantines are nice, I still feel they lack a certain panache some of the other groups have. So I went for a Varangian Guard Warband (Viking mercenaries in Byzantine service). They were led (as required) by Harald Hardrada. There were two points of Varangians (Viking Heathguards) armed with Dane Axes, one point of Kontaratoi (Warriors with spears) and two points of Toxotai (Warriors armed with bows). As the interested reader will notice, this only adds up to five points, but with the Warlord being a hero of the Viking age, he costs an extra point and therefore only allows for five points of units. I have to say I would have liked a different composition to get away from that huge block of archers, but all Heathguards have to be Varangian and the need to make up less than half the units. Byzantine cavalry was not allowed as well, which limited the choices somewhat. I was also a bit anxious, since a Varangian Warband is played with both a Viking and a Byzantine Battleboard. The Byzantine units only generate Continental (also called Norman dice), while the Varangians can choose to generate either continental or runic (also called Viking dice). The Warlord can only generate one die per round unless he takes fatigue to create on or two extra dice.

As you can see, the terrain was quiet green and the village had a distinct Viking look. So let’s assume Harald was on home leave, taking a retuine befit his status along and those pesky Normans simply could not leave him alone… So much for a holiday. 😉

We decided to play Clash of the Warlords, as we do most of the time. I think we really need to take a look at the homegrown scenarios on the Gripping Beast forum!

We rolled for initiative and rolled a tie. So in other words… I won an account of my more impressive facial hair.

The Normans deployed the large cavalry unit in the centre and one each of the small ones on each flank. The crossbows were deployed on their left flank and close combat Sergeants on the right. The Warlord was slightly off centre to the right. So in other words… The deployment I have come to know.

The table
[Normans to the left, Varangian Guard to the right]

The Normans won initiative and started a general advance. Max had been able to roll enough flags on the dice to allow for two re-rolls, so it did not stay there. The large unit of cavalry activated for a second time and charged the Kontaratoi. Aided by some Norman abilities they got a lot of dice and one instant kill, but on account of some good saving throws on my side only killed four of the spearmen, who in turn killed two Norman horsemen before being forced to withdraw. 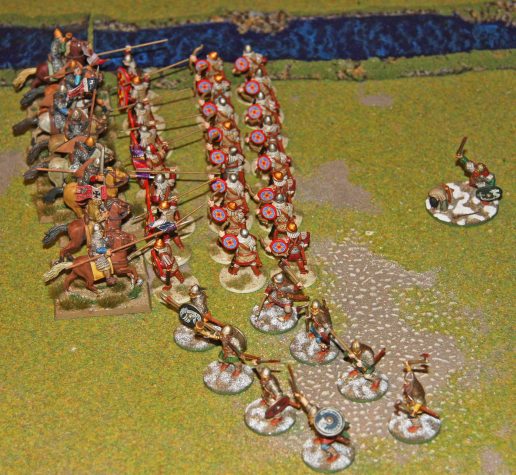 Aftermath of the first Norman attack

With initiative passing on to the Varangian Guard, it was time to decide how to spend my SAGA dice. I went for two continental and four runic dice (my warlord had to take one fatigue for that). Now the runic dice went really well. Even after two re-rolls I still had two suwulo dice. So the first thing was for the Varangians to call Ragnarök, which meant one less armour for all Normans for the rest of the turn. While the Kontaratoi only removed the fatigue left from their last combat, their Toxotai brothers shot their bows at the large Norman cavalry at pint blank range… another two horsemen dead. Now the lead unit of Varangians charged the Normans. Bet ween their Dane axes, the Norman fatigue and the Ullr ability (which allowed them to re-roll failed to hit rolls) they scored nine hits. Max failed to safe enough and the four remaining horsemen were on the way to their graves. The Norsemen mercenaries lost two of their own, but in the end, it was a small price to pay, for taking out the largest Norman unit before the first round was over.

It was a huge psychological blow for the Normans. For the next round they only advanced cautiously, with their foot troops catching up to the horsemen, while the later only loitered around, just outside arrow range of the Byzantines.

The Vikings too used this round to get their formation back in order. Varangians formed a new screen before the archers (the blooded unit to the right, the fresh one to the left) and the archers moved forward behind the mercenary screen. The Kontaratoi moved to the left taking over flank protection.

The next Norman activation saw another advance, mainly by the foot troops, but also by the cavalry on their right flank. The crossbows activated another time and fired a volley at the depleted Viking unit. But on account of their superior armour that unit only took one loss, bringing them down to one man.

With activation now passing back to the Varangians the Byzantine archers opened up on the Norman crossbows and showed them how to do it… three crossbows down. Otherwise the Viking unit which was still in mint condition moved forward towards the cavalry that had inched forward more and activated for a second time to charge them. Since their Warlord had taken another fatigue to roll and extra die and since I had been lucky with the re-rolls they too could make use of Ullr and annihilated all four horsemen at a loss of two of their own.

Obviously things were not looking too good for the Normans by now. When their crossbows activated to fire at the archers, the gods intervened and made them move instead (did I mention that I had gotten really lucky when I last rolled the SAGA dice?) the Sergeants charged the Varangians who had just killed their mounted Knights. Now this actually went well for the Normans since they wiped out their opponents (although I can not remember what price they paid, but I think it was only one or two).

But this is where the luck ended for the Normans. For the next activation I decided to put an emphasis on continental dice and the Byzantine archers were able to get two massed volleys. The first one was fired at the Norman crossbows and managed to kill all five of them. I think in about a dozen games played versus the Normans, this must have been the first time, I killed the whole unit of crossbows. So for a lack of targets, they shifted their aim to the Sergeants on the other flank and killed another two. Not much else to do….

Now it was time for one last Hail Marry attack by the Normans. With a double move the Norman Warlord charged the Toxotai and ordered the remaining mounted Knights along. Beefed up by some Norman ability, they hit the enemy archers and inflicted a total of six losses for only one loss of their own. Not content with their success, the Knights charged the retreating Byzantines once more, without their Warlord this time. But now it did not go this well. The Toxotai decided to use the three fatigue the Knights had accumulated at the moment they made contact to lower the Norman armour and this time none survived, while the horsemen failed to make a real impact.

And this set the stage for the final assault of the game. The Varangian Warlord charged his counterpart with a double move and ordered the archers (being the biggest unit in range) to join in. Between the two of them, they scored nine hits (the Norman Warlord still had two fatigue, so his armour was lowered considerably) of which he only saved two and perished. In turn he only scored three hits of which the Norse Warlord saved two.

So some thoughts on playing a Varangian Guard Warband. My decision to try them out had mainly been driven by the fact that the Byzantine Warbands seem to be very defensive. The best you can get from their Battleboard (unless you field an all cavalry force for which Normans would be better suited though) is by fielding a large amalgamated unit of archers or two units working in unison. With the close combat screen they require they become very cumbersome and usually stay in place. Either waiting for the enemy to come to them or for the other units to operate under their screen. As I said very static and defensive.

Now the Varangians do not really change that. All Heathguards in the Warband need to be Varangians, but no more than half the Warband my be Varangians. Given the fact that their Hero of the Viking Age Warlord already takes up one point, this means you can only field a maximum of two points of them. What does this leave you with? Three points of Byzantine foot (no mounted troops allowed in a Varangian Warband). Levies would be bad choice, since you need to split your dice between two Battleboards and the Warlord generates less dice than normal, which means you need every SAGA die you can get. So this leaves Warriors and what is your best choice? Two units of archers and one unit of close combat to protect them. In other words… It is Groundhog Day! Only this time the units operating under their screen are Viking Heathguards, with access to their extremely powerful Battleboard, a heightened armour of six and access to Dane Axes. So the Warband is still static and defensive but with a real über-close combat element. Still not my style of play,

Before I leave you, just some other news. I managed to finish the next generic unit of French Napoleonic infantry the other weekend, but never got around to finish their bases. But at the same time, I made good progress on the next French unit. They should be finished today, so I shall do the bases for both in one go and show them to you this weekend.