Our game at Crisis 2015: Battle of Berlin

So, after keeping you all excited for days now, here are the game shots from our Battlegroup: Fall of the Reich  demogame at Crisis this year.

To be honest, it is hard to make a coherent game report out of the game, due to all the chatting with people, explaining the mechanics, answering where the vehicles and models came from and so on. But I will at least try for a very short synopsis:

The Germans were a mixed Battlegroup formed around a nucleus of a Volkssturm platoon, beefed up, by a squad of Hitlerjugend tank hunters, a squad of SS Panzergrenadiere in a halftrack, some Wehrmacht Pioniere, a SS sniper team, a Pantherturm, 8.8cm Pak “Scheunentor”, a Borgward Wanze, a Panther and a Tiger II (Commander).

The Russians had a Platoon of rifles, with Maxim, Ratsch-Boom AT-gun and AT-gun team, an artillery spotter team for their onboard mortars and heavy artillery, a squad of Assault Pioneers, one of Scouts, three T34/85, two JS-II tanks and a lone T-34/76 (Commander).

Julian and I started the game in quite classic fashion. The Germans waiting for the Russians to run into the traps they had laid and the Russian tanks trading were shots with the Tiger and Pantherturm at long-range, while waiting for the infantry to catch up and protect them from the pesky Panzerfäuste.

During this time not much happened. Much like the Demo last year, both of us managed to alternate at rolling bad so we did not take out much with our long-range shots. (The funniest exchange was between the Pantherturm and JS-II who had problems spotting each other and one of the JS finally did and hit, he got a snake eyes for the penetration roll [he would have needed a three on two D6] only to roll a twelve the next round.) The most impressive exchange was the Russian sniper and one of the SS snipers killing each other, which left the lone German sniper to kill one the artillery spotters, pinning the other. When the Russina infantry command was also pinned, this effectively rendered the Russian mortars and Artillery useless (especially since the the participation gamers would continuously forget to unpin them). We also found out that a fanatic squad of Hitlerjugend can well take out a squad of Soviet elite scouts at short-range with their SMGs and a little help from the Panzergrenadiere. And that even with our gods eye view of the battlefield, it is easy to drive a T34 around a corner only to find the road blocked with Czech Hedgehogs and becoming a prime target for a PaK as a result.

Obviously things really picked up once the first participants came and played along, driving their tanks and infantry on without regard for losses. At that time tanks started blowing up all around the table and infantry perished left and right. This was also the first time I saw man-pack flamethrowers in use in the game and boy are they deadly assaulting buildings, especially on a squad sporting a fair amount of SMGs! All in all we had a cracking day and I hope the players had one, too. I will leave you with the pictures!

Pantherturm and Volkssturm MG-08 team in the front, Tiger II in the rear

AT-gun position with the Volkssturm command looking on

SS sniper in one of the tall buildings 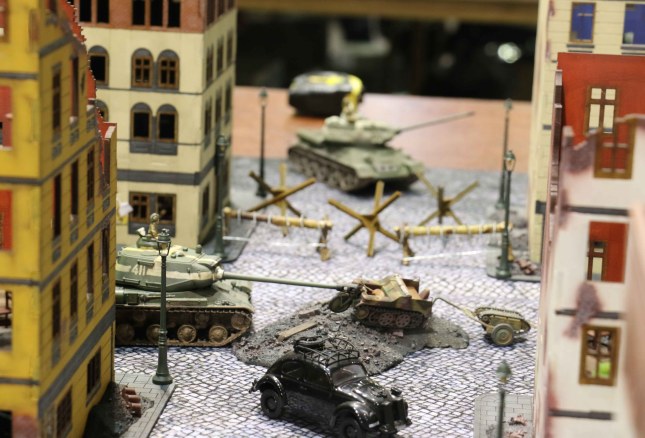 Hiding behind the rubble 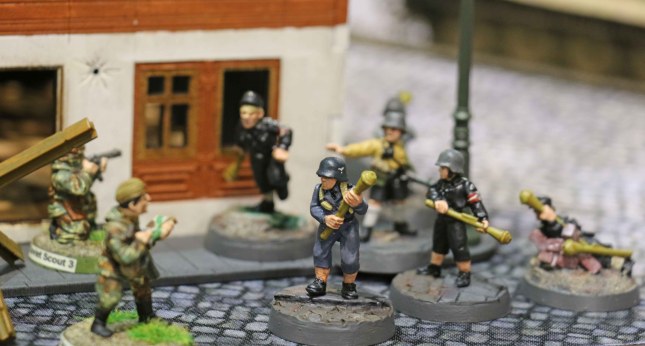 Hitlerjugend about to take out the Soviet scouts

Russian Pioniere about to assault

Enemy at the doors 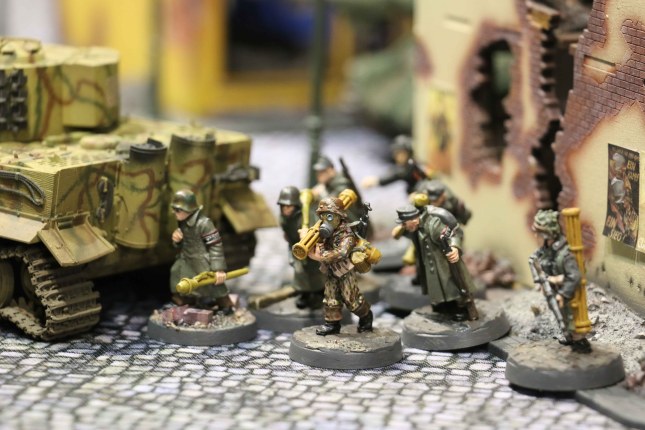 The end of the Pantherturm

Tiger II waiting behind the barricades