When they announced the Star Wars Legion game late last year, I knew, that I had to play it. And I knew that I needed some terrain for it. When I saw the Battle Kiwi Kickstarter I knew that this would be great for the game and I bought into it. And I was not disappointed. All the buildings went together very easy and required very little effort to make them even better. Plus they are super versatile.

Up first is the bunker. It has a good level of detail, provides cover to the minis standing atop the roof. I like the fact, that it has opening doors and that you can take part of the rear wall out, to give you the ability to connect it to different buildings they are planning to release later on. The three consoles that come with the bunker offer some nice cover to the minis inside. I repainted these dark grey and picked out the buttons and screens. 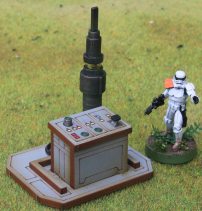 The tech working area is a nice homage to the ending areas on Scarif in Rogue one. The containers suffer a bit from the problem you have with all MDF terrain… you see a lot of the edges on small pieces. So I repainted these. Which was easy enough. Since the Battle Kiwi terrain is pre-painted, I took the paint really well. With the control console I simply picked out the buttons and details while painting the the antenna in gunmetal. 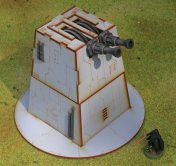 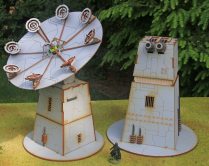 Now on to the big models… the dish for the shield generator on Endor and a Turbo Laser turret. The are really great in that they provide great LOS-blockers for both infantry and vehicle sized models, while being really scenic. I made some minor improvements in that  I picked out some of the cables in dark grey and painted the turbo lasers themselves in gunmetal grey. Since you can interchange the tops of both models, it gives you even more versatility and makes them easy to store. 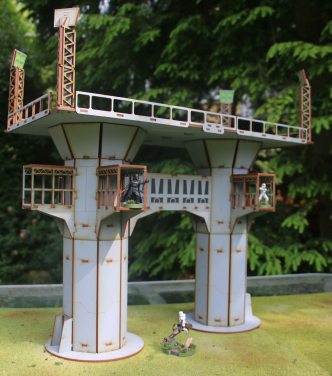 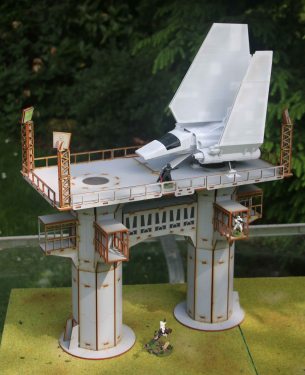 Now this landing pad is undoubtedly the absolute centerpiece of the whole range. As you can see it really towers over the minis. That being said, it is easy to store, since the pylons are separate from the landing pad, which is itself is two parts, with the railings and light pylons coming off as well. As you can see, you can also do a lower landing pad and add some stairs to it and place some power generators on the pylons, or use the generators by itself. I only made some minor alterations to the model, by painting on landing lights and doing the openings into the platform itself in gunmetal grey.

The biggest problem with the model is, that it looks a bit bare by itself. So it was screaming out for a shuttle to be landed upon it. Since there is no model of a Lambda Class shuttle in the right scale, I could count myself lucky, that Martin has a 3D-printer and printed one out for me. The model itself is a bit simple, but as a terrain piece it is doing fine.