Last week it was SAGA time once more and Martin and I met for a short game before he left for Salute in London (lucky him!).

It was quiet spontaneous and due to the great weather we decided to move the game to the outdoors. Hence a slightly simplified set-up, with mainly open ground, a few hills, trees and cornfields and a small village.

We decided to play Clash of the Warlords, my Byzantines vs. Martins Normans.

The Byzantines consisted of three points of Kavallaroi (mounted Heathguards), two with spears which would be amalgamated into one large unit and one with bows. There were also one point of Kontaratoi (Warriors with spears) and two points of Toxotai (Warriors armed with bows). As mandatory, they were led by their mounted Warlord.

Martin was playing his Normans in a new set-up. A mounted Warlord, four units of mounted Knights (Hearthguard) and two units of Sergeants (Warriors), one of them armed with crossbows. Martin would amalgamate two of his Knight units into a large one.

The Normans (after winning set-up initiative) would deploy the large cavalry unit in the centre and one each of the small ones on each flank. The crossbows were deployed on their right flank and close combat Sergeants on the left. The Warlord was slightly off centre to the right.

The Byzantines deployed their archers in two units right behind the other in the centre, right behind a spearmen screen. The Toxotai were deployed on their right flank and the Kontaratoi accompanied by the Warlord on the left opposite the Crossbows and village.

Cavalry… lots of them

Again Martin won initiative and for the first round we both advanced on one another. The Normans second activation saw them advance a little more, but no contact was made and no bolts fired.

Now initiative passed to the Byzantines. I rolled really well on the SAGA dice and made my first mistake… I got greedy. The Toxotai fired their arrows at the mounted knights to their front. One Norman dead. The large formation of foot troops advanced in the centre and fired a concerted volley by both units of Archers at the large unit of cavalry bearing down on them. Two dead. Not the best dice rolling, but it was bound to get worse. And this is where I made my big mistake. The Kavalaroi would have been in range to charge the lone Norman Warlord with a double move through the village. But I did not want to end the game after just a half round of combat, so I chose to charge the crossbow armed Sergeants instead.

Byzantine cavalry advancing towards the enemy

In part this was motivated by me never having annihilated them completely in any game played against Normans before. Plus I felt that the Normans would never charge a double unit of cavalry with just a small cavalry unit and a Warlord at best. And this is where the dice gods struck. Instead of killing the whole unit of Sergeants, only five out of the eight perished. But I lost three Kavalaroi. Not good! 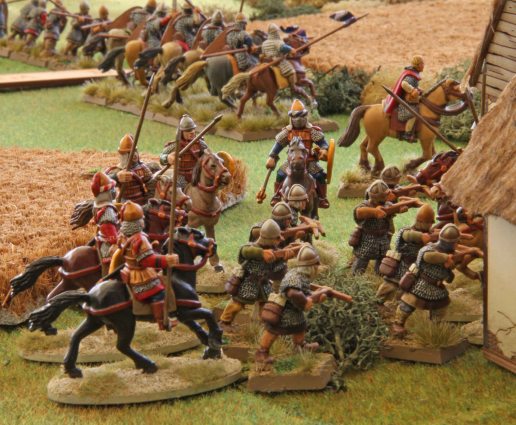 Now initiative changed back to the Normans. The remaining Sergeants fired their crossbows at the Byzantine cavalry, but did no damage. But now they were charged by the small unit of Norman mounted Knights, accompanied by their Warlord and under use of the Dex Aie ability. Apparently they did not look scary enough after three losses anymore. There were annihilated for good. Martin did not even need to roll all his dice available to achieve that. And to make matters worse, the Byzantines took not a single Norman with them.

Norman Cavarly against their Byzantine counterparts

In the centre the large Norman cavalry formation charged the Byzantine foot. Five spearmen met their fate, but at least this time two Normans paid the ultimate price as well. In a last measure the remaining small unit of Knights charged the Toxotai and the clash ended two for two.

With initiative back in Byzantine hands I tried to consolidate things. My Warlord moved around the village to get himself into a better position for next round. The Toxotai fired another volley at their opposites, but caused no damage. But my main emphasis rested on the centre. The archer loosened off two concerted volley of arrows. One should think the a total of sixteen shots would do better, but they only managed one kill. Now the remaining three Kontaratoi charged in after having recovered their fatigue. Again one Norman dead, but all three spearmen perished… this was getting worse by the minute!

Now it was Martins turn once more. The Knights on the Byzantine right charged the Toxotai and caused them one casualty. Now both units were down to one man each.
In the centre what remained of the large formation of Norman cavalry went for the Archers, causing three losses to the front unit at a single loss of their own. All the other Norman units, with the exception of the Warlord who remained idle, closed in on the centre too.

So now it was all or nothing and my Warlord charged his Norman counterpart in a double move. What shall I say… He did not cause a single hit, but received five. None of which I saved. And thus ended the game in a Norman win.

Clash of the Warlords

I have to say… Martin played his Normans really well, while I saw that I really need to get used to the Byzantines. If you add my tactical mistake due to greed at the beginning to the equation, I would not have needed the bad dice rolls to loose this one. Well there will always be a next time.

By the way: at my request Martin got me a more animated looking Warlord for my Byzantines at Salute. Maybe he will put sound tactics over greed! 😉

Posted by Burkhard on April 25, 2013 in Byzantines, Medival, Normans, SAGA

21 responses to “SAGA Byzantines vs. Normans”